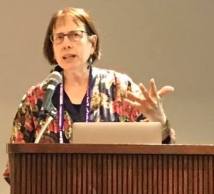 I’m finally getting around to putting down some of my many thoughts from being at The Parliament of the World’s Religions in Toronto. It makes sense for this blog to begin with the recognition that there was a lot of opportunity to engage the subject of patriarchy.

The Frustration of Abundance
As fantabulous as the Parliament is, one of the frustrations of the week (as well as one of the blessings) is the plethora of workshops and presentations that occur all within each time slot. For example, I would so loved to have heard Carol Christ speak on “Why We Still Need the Goddess: Religions and the Abuse of Women and Girls.” (Thankfully, I did find this excerpt from her talk in a blog post called “Religions and the Abuse of Women and Girls: God Is the Problem.”)

But as I was planning out my schedule for that day, I realized that she would be speaking at the same time as “Climate Change and Women: A Conversation with Margaret Atwood.” Now that is just not fair! How to choose?!

Women Rising Against Patriarchy in Religion
But it turned out that I didn’t make it to either one. I participated in my own workshop before theirs and then ended up continuing the conversation with a group of women out in the hallway afterwards. I was on a panel called “#MeToo, #Time’s Up, and Women Rising Against Patriarchy in Religion” and my portion of the presentation was on the religious roots of patriarchy in Christianity.

You can watch Part 1 and Part 2 here.

You can see why I would surely have appreciated what Carol Christ had to say.  Obviously, she has gone into greater depth on this subject than I have. And though I agree with her premise that “the Bible as a whole supports male dominance through the pervasive and almost exclusive use of language that portrays God as a male, most often as a dominant male, as Lord, King, Warrior, and Father,” I still unabashedly come at it from the perspective of a Christian pastor trying to reform the tradition.

Taking Action
Hence my list of action items at the end of my presentation:

2.  Encourage the reading of sacred texts with a “hermeneutic of suspicion” which questions traditional interpretations

3.  Recognize the misogyny of many of the early Church leaders and their ongoing legacy

4.  Recognize the “texts of terror” in our sacred texts and the violence that continues to be justified because of them

5.  Recognize the spiritual, emotional, and physical violence perpetrated by an entrenched patriarchal system, both within the Church and society in general

6.  Commit to the revision of theologies, teachings, liturgies, and practices to reflect the goodness of all people especially those who have been most impacted by patriarchy

7.  Develop systems of real, shared power, with representation by all groups 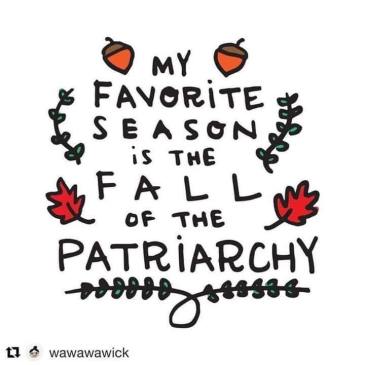 Another frustration of the Parliament is that there is so little time for lengthier and deeper engagement with what is presented in a workshop. We had very little time for Q&A, but the questions that were asked ranged from wondering why even bother trying to reform the church to advice on how to do it. Although the conversation did continue in the hallway, none of the original questioners was there (probably rushing off to the next workshop!)

I sure would have loved to be part of a discussion that included the members of my panel, the leaders of the Gender Reconciliation workshop I attended, and of course, Carol Christ. Plus all the women and men who attended all of these and other workshops on dismantling patriarchy.

However, I am extremely grateful for the opportunity to be there and to be part of the movement. As another member of my panel said, “always leave them wanting more.” There will indeed be more.