And Mary said:My soul proclaims your greatness, O God,
and my spirit rejoices in you, my Savior.
You have shown strength with your arm;
you have scattered the proud in their conceit;
you have deposed the mighty from their thrones,
and raised the lowly to high places.
you have filled the hungry with good things,
while you have sent the rich away empty.   (Luke 1: 46-53)

I found this great tee shirt on Ben Wildflower’s Apocalyptic Art store on Etsy. And I absolutely love it! This image of Mary illustrates what I’ve been thinking for a while now: Mary is one of our greatest prophets.

The Magnificat is Mary’s response to her cousin Elizabeth after telling her about her pregnancy. For too long, Mary the mother of Jesus has been portrayed as virginal, meek and mild, 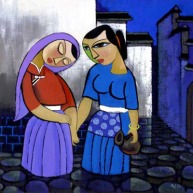 and obedient. Then, of course, these attributes are lifted up as the example for all of womanhood. But here we have another way to look at Mary – a faithful, obedient servant God, speaking in a powerful, prophetic voice of God’s justice.

Throughout history, the rich, mighty, and proud were quick to get Mary’s subversive message. Yes, The Magnificat was banned being sung or read in India under British rule. Yes, the military junta of Argentina outlawed any public display of Mary’s song after the Mothers of the Plaza de Mayo plastered her words on posters throughout the capital plaza. In the 1980’s, it was banned in Guatemala.

Dietrich Bonhoeffer, the German Lutheran theologian killed by the Nazis in 1945, wrote:

The song of Mary is the oldest Advent hymn. It is at once the most passionate, the wildest, one might even say the most revolutionary Advent hymn ever sung. This is not the gentle, tender, dreamy Mary whom we sometimes see in paintings; this is the passionate, surrendered, proud, enthusiastic Mary who speaks out here….. This song…..is a hard, strong, inexorable song about collapsing thrones and humbled lords of this world, about the power of God and the powerlessness of humankind. These are the tones of the women prophets of the Old Testament that now come to life in Mary’s mouth. (The Mystery of Holy Night)

I love to preach about revolutionary Mary in Advent when the Luke text always appears. But now, I’m also claiming her as patron saint of this blog, which is dedicated to the dismantling of patriarchy.

DISMANTLING PATRIARCHAL DUALISM
By definition, patriarchy is a system in which men have power over women patriarchal

society consists of a male-dominated power structure throughout organized society and in individual relationships. But I want to go beyond just the male/female power dynamic to address all patriarchal dualities.

Dualism divides the world into opposed pairs of concepts. In this system, one concept in each pair is deemed superior to the other: men better than women, humans better than nature, mind better than body, etc. It’s easy to see how judgments about gender, race, class, etc. arise out of this way of seeing “reality.”

In the patriarchal belief system, ‘masculine’ qualities of reason and analysis are deemed superior to intuitive, emotional ‘feminine’ qualities. Misogyny isn’t just about women; it includes anyone perceived to be ‘like a woman,’ which explains much of the homophobia directed towards gay men. Homophobia is underpinned by patriarchy, which defines what it means to be a ‘real man’ and a ‘real woman.’ The domination of women and the domination of nature are also fundamentally connected, which has lead us to the brink of environmental destruction.

Unfortunately, it’s been religion that has propped up this dualistic, misogynistic, body-denying, earth-destroyng worldview.  And it’s time for it to end. This blog will continue to explore the religious roots of patriarchy – in all its forms – and hopefully contribute to dismantling at least a small piece of it.

*** The Magnificat image is used with permission.
*** You can find other prints by Ben Wildflower here.